Over the past three decades, in response to a massive increase in the number of people behind bars, corrections systems have increasingly relied on isolation and segregation as a prison management tool, even building entire “supermax” prisons where prisoners are held in extreme isolation, often for years or even decades.

Policymakers, advocates, and practitioners from across the spectrum are beginning to question this status quo. In light of this broad and emerging sense that the use of isolation has gone too far, on September 30 and October 1, 2015, the John Jay College of Criminal Justice, with support from the Jacob and Valeria Langeloth Foundation, convened a unique two-day colloquium of 15 corrections leaders and 15 experts, academics, and leaders in the advocacy community to consider the use of segregated housing – often referred to as solitary confinement – in our nation’s correctional facilities.

Together, these leaders forged greater connections and collaborations, identified “lessons learned” from efforts to date, and formulated plans to ensure sustainability for a reform effort that still has much to accomplish. While their opinions on how to reform isolation may differ, they found remarkable common ground on the need for change, forming unlikely partnerships and exploring alternative approaches to public engagement on one of the most pressing challenges to the safe, effective, and humane management of our prisons and jails.

The outcome of the convening is a written report that will identify specific areas of commonality as part of a national roadmap for supporting the reduction in the use of long-term isolation. 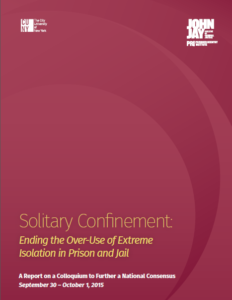 Solitary Confinement: Ending the Over-Use of Extreme Isolation in Prison and Jail | A Report on a Colloquium to Further a National Consensus (September 30 – October 1, 2015)