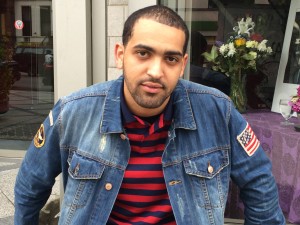 Where did you grow up?

I grew up in Harlem, mostly Harlem, coming up.  Probably 5-6 years of my life I was bouncing around in foster care in Brooklyn, Bronx, very close to getting adopted, then I ended up coming home to Harlem with my dad, and from there went back with my mom.

Did you ever come to the National Black Theatre when you were growing up?

They used to throw parties in here, Saturday nights, reggae parties actually.  That’s the only time I been in here until we came to work here.

What work did you do with the Harlem Justice Corps on your community benefit project at the National Black Theatre?

Before we came to work [at the National Black Theatre], we went around to different locations, and I did some research on this personally and figured out how it was this national landmark in Harlem.  Dr. Barbara Ann Teer, she had this building and was pretty much the first black female owner to have something like this. That was at a time where Harlem was heavy in racism.  The story is amazing.

The performers didn’t have a place to change so we put a soundproof wall up.  We put a little dressing room.  We painted the sprinkler pipes and the stairs. 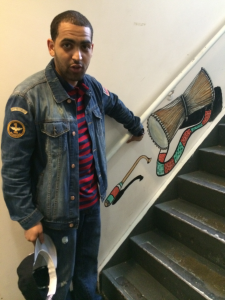 I feel honored to be a part of this, that they would even let us do this.  I see the bigger picture behind things. I don’t look at things just for myself, I say pay it forward.  Being criminal orientated or past criminal relations, nobody gives us a chance, we got stereotyped, we got this stigma to us.

Did you feel that stigma working here?

It didn’t feel it because as far as the rest of the cohort members, we all had the same mindset.  Some stepped differently, so to speak, but Nabii [Faison, National Black Theatre Building Manager] was great in every way, seriously. He gave insight, he gave wisdom, sometimes just advice. Sometimes he came and helped out.  He told us how they imported the artists here from Nigeria.  That was something real special to me, and they was willing to trust us with this priceless stuff.

How did you get your current job?

I went from Justice Corps to Construction Staffing Solutions.  In the Justice Corps when it was the internship phase they [the Justice Corps staff] ask you what you’re interested in.  I told them I want to help people—I want a job like theirs.  But I was eager to get into anything cuz I needed income.  Eventually I want to go to school, but I got settled down in the job and then I saw how much opportunity I had to grow as a person, as a businessman, and grow the company too.  I was supposed to do 32 hours most for the week [on the internship].  I was doing 48, 50 [hours].  I went serious into it.  I moved up to Account Manager.

I give people jobs [in construction].  I like to help people out.  I started dealing with a bunch of different nonprofits, that’s where I pull my manpower from–CEO, Strive, Goodwill, Justice Corps.  That’s just my way of giving back.

The people in my community they look up to me, they love me.  The transition was so—they didn’t expect this.  Before my incarceration I was in the streets real heavy.  Now, the people in my neighborhood, I employ them.  I don’t know too many people who give people jobs.

The guys [I hire] look at me differently because I’m a young guy they can relate to.  Some of them know my experiences.  They come into my office, and they know that I was incarcerated with them.  They appreciate it more cuz everywhere they go they run into a brick wall.

I don’t give nobody no lay-up neither.  I don’t make it easy for nobody.  I’m going to let you know what you need to do.  I’m gonna give you the tools you need to succeed if you willing to go hard and put in the effort.  You gotta strive for whatever you want.

I got to break it down to them in ways they can understand.  I break it down in street language.  Whether you want to be a rapper or a basketball star cuz nobody became an NBA superstar overnight.  You gotta get up in the morning and shoot your free throws.  Sacrifice goes hand-in-hand with any type of growth or progress.  You can’t have one without the other.

Age don’t make a man, responsibilities do.  From the age of 12 or 13 when I was in foster care I grew up before my time.  I don’t want to ask nobody for nothing cuz I don’t like asking for handouts.  I work toward where I’m at now.  I’m in a completely better place.

Did the NYC Justice Corps help prepare you for work?

When we presented to the CAB [the Community Advisory Board that reviews and approves service projects designed by the Corps members] we had to do powerpoints and follow the strict criteria of the proposal.  That’s the first time I ever made a proposal.  Justice Corps not going to do everything for you.  Justice Corps can’t walk for you.  They give you as much knowledge as they can.

Justice Corps gave me an opportunity when they introduced me to the company I’m working for and helped me get my OSHA [Occupational Safety and Health Administration training on the recognition, avoidance, abatement, and prevention of safety and health hazards in workplaces in the construction industry].

What advice do you have for Justice Corps members?