“This is a moment in the field where big change is possible.”
~ President Jeremy Travis, John Jay College of Criminal Justice

At a watershed moment of declining violent crime and broad political and public support for reform, the John Jay College of Criminal Justice, in partnership with the Laura and John Arnold Foundation, brought together thought leaders from across the field for two groundbreaking roundtables in 2015 focused on rethinking the front end of the criminal justice system through research, reform, and renewed dialogue.

Reports on the Roundtables on Pretrial Practice

PRI is excited to announce the release of two reports documenting two Pretrial Roundtables held at John Jay College in March and October of 2015. The Roundtables brought together preeminent scholars and practitioners from around the country to identify trends, areas of consensus, and gaps in what we know about pretrial justice, and to begin charting a national pretrial research agenda. PRI was truly thrilled to convene this critical conversation, which now sits at the cutting edge of criminal justice reform, with generous support from the Laura and John Arnold Foundation. The reports offer an overview of the discussions, areas of consensus, and opportunities for further exploration identified by the Roundtable scholars. We encourage you to read further to see the bold ideas, vibrant discourse, areas of consensus, and opportunities for further exploration that resulted from these significant convenings to reframe the narrative surrounding the pretrial phase of the criminal justice system. 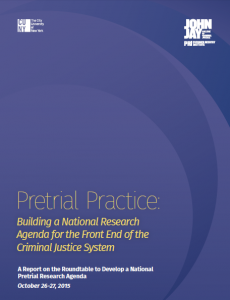 Pretrial Practice: Building a National Research Agenda for the Front End of the Criminal Justice System | A Report on the Roundtable on Pretrial Practice (October 26-27, 2015)